Pétanque is one of the most popular sports in Laos. The game is very easy to play, and is one of the most cherished pastimes of the Laotian people. Click here to take a closer look at Soulasith Khamvongsa, the nation's petanque hero.

Pétanque is a sport played by all ages and both sexes the only sport in which Laos has made any sort of impact on the international stage.

Soulasith Khamvongsa has won medals at the South-East Asian Games, the Asian Pétanque Championships and is considered to be amongst the top 40 players in the world. He is arguably Laos' most successful sportsman. At the age of 17, he was chosen to represent Laos at the 2001 South-East Asian Games in Malaysia. It was the first time that Pétanque had been included in the Games and Soulasith led his nation to gold in the Doubles event.

Soulasith Khamvongsa, Pétanque player said "Pétanque has been popular in Laos for a long time, ever since the French brought the game over. But Pétanque's popularity really took off after we won that gold medal. When we got back I travelled around the country and played lots of exhibition matches in various villages. That was great fun."

Soulasith's success has been phenomenal. It was only the second time in 42 years that Laos had won a gold medal at the Games. Still at the age of just 24, he believes that he has yet to reach his peak in the sport. There are still lots of potential medals to win, starting in front of his home crowd at next year's South-East Asian Games.

In order to locate more talented players, the Laos Pétanque Federation is using local competitions to spot people that could make it onto the national team. The hope more Laotian petanque heroes will make their way onto the international stage.

Posted by La Petanque Mariniere at 12:26 PM No comments: 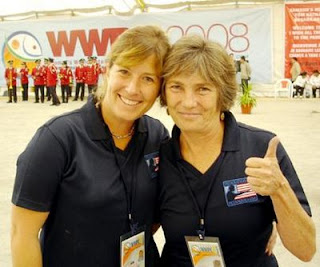 Sonoma's Antonia Chavez (r), and Erin McTaggart (l), are members of the Valley of the Moon Pétanque Club who, playing for the United States women's team, recently competed against 35 international teams at the 2008 Women's World Pétanque Championships in Samsun, Turkey.
Click here to read the full article.
Posted by La Petanque Mariniere at 1:54 PM No comments:

Christmas and it's traditions don't always bring visions of joy and happiness to everyone, so keep in mind that when you are out looking for that perfect gift...that love is the easiest gift to give. It's simple...it's elegant...and it lasts a long time. It's always brand new...and if it's returned, it brings more joy. At this time of the year, let us reach out and forget all of our bitterness toward our fellow man, extending to him or her our true hand of love and friendship...because love brings hope, and hope removes doubt, and without doubt, there is no uncertainty.

La Pétanque Marinière would like to wish all of you, wherever you may be, and however you may choose to celebrate it, the most joyous holiday season filled with family, friends, laughter and good health.
Posted by La Petanque Mariniere at 12:01 PM No comments: 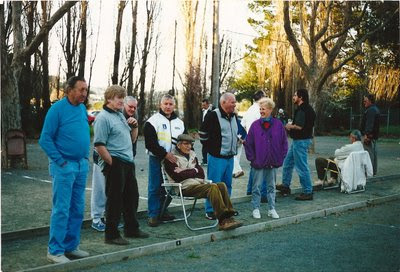 Here's a great foto, taken a few years ago, of some LPM members enjoying a nice game of pétanque on what appears to be a sunny winter's day, sent in by our own Monique Bricca.


If you have any old fotos or print nostalgia you would like to share, please contact us at: petanque.marin@gmail.com
Posted by La Petanque Mariniere at 9:33 PM No comments:

Come to Fresno and play petanque with us soon. See you on the piste!