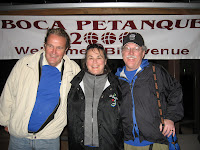 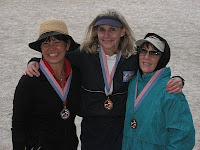 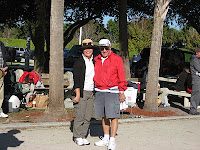 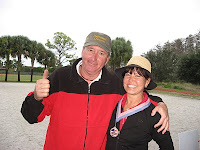 Posted by La Petanque Mariniere at 8:59 PM No comments:

From Our President, Joe Martin


Saturday, in Boca Raton, Florida, one of our NW Regonal representatives, Peggy Matsuda (LPM) took the silver medal in the FPUSA National Women's Singles competition,
In yesterday's FPUSA National Mixed Triples, the other two players from the NW region Joe Cortright, and Christine Cragg of LPM (Marin), and Bernard Martin, (Sarasota), finished in the money with 4th place. Very good for a made up team whose players had never played together before, and on an unfamiliar terrain, too. Congratulations!

Joe
Posted by La Petanque Mariniere at 10:17 AM No comments:

For those pétanque players with ties or interest to the catalán region of Spain, there is now a website dedicated solely to their activities.
The address is: http://www.fcpetanca.cat/
Posted by La Petanque Mariniere at 12:47 PM No comments: 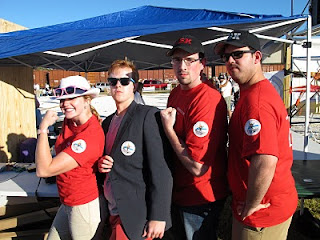 From the folks at UBK Studios comes the first glimpse of what their upcoming pétanque movie is going to look like. If it's anything like the trailer, it should prove to be quite a smashing success.
Watch it in full screen HD.

Posted by La Petanque Mariniere at 6:57 PM No comments: 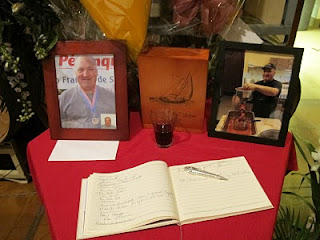 A great many came from near and far yesterday to pay their respects and say a fond final farewell to our brother Tino Lofaro. It was a good thing that the memorial mass was held St. Vincent de Paul church since another venue might not have been able to contain all of his friends who were present. A beautiful and impassioned eulogy was delivered by his brother Aurelio.
Afterwards, Tino's life was celebrated with a beautiful event put together by Jacuzzi Winery in Sonoma, where he had been employed as a cook. Tino was given the posthumous honor of having the kitchen named after him.
To view the fotos taken that day, click here

Posted by La Petanque Mariniere at 6:32 PM No comments:

In light of our most recent passings, Louis Castagné and Tino Lofaro, a story came to mind about a leaf named Freddie. It seemed appropriate that the story be shared since our terrain is graced by nine towering shade trees which provide wonderful shade under which to play in the warm summers, and beautiful bronze and golden colored leaves in the fall...

Spring had passed. So had Summer. Freddie, the leaf, had grown large. His mid section was wide and strong, and his five extensions were firm and pointed. He had first appeared in Spring as a small sprout on a rather large branch near the top of a tall tree.

Freddie was surrounded by hundreds of other leaves just like himself, or so it seemed. Soon he discovered that no two leaves were alike, even though they were on the same tree. Alfred was the leaf next to him. Ben was the leaf on his right side, and Clare was the lovely leaf overhead. They had all grown up together. They had learned to dance in the Spring breezes, bask lazily in the Summer sun and wash off in the cooling rains.

Freddie loved being a leaf. He loved his branch, his light leafy friends, his place high in the sky, the wind that jostled him about, the sun rays that warmed him, the moon that covered him with soft, white shadows. Summer had been especially nice. The long hot days felt good and the warm nights were peaceful and dreamy. There were many people in the park that Summer. They often came and sat under Freddie's tree. Daniel told him that giving shade was part of his purpose.

"What's a purpose?" Freddie had asked.

Freddie especially liked the old people. They sat so quietly on the cool grass and hardly ever moved. They talked in whispers of times past. The children were fun, too, even though they sometimes tore holes in the bark of the tree or carved their names into it. Still, it was fun to watch them move so fast and to laugh so much.

But Freddie's Summer soon passed. It vanished on an October night. He had never felt it so cold. All the leaves shivered with the cold. They were coated with a thin layer of white which quickly melted and left them dew drenched and sparkling in the morning sun. Again, it was Daniel who explained that they had experienced their first frost, the sign that it was Fall and that Winter would come soon.

Almost at once, the whole tree, in fact, the whole park was transformed into a blaze of color. There was hardly a green leaf left. Alfred had turned a deep yellow. Ben had become a bright orange. Clare had become a blazing red, Daniel a deep purple and Freddie was red and gold and blue. How beautiful they all looked. Freddie and his friends had made their tree a rainbow.

"Why did we turn different colors," Freddie asked, "when we are on the same tree?"

"Each of us is different. We have had different experiences. We have faced the sun differently. We have cast shade differently. Why should we not have different colors?" Daniel said matter-of-factly. Daniel told Freddie that this wonderful season was called Fall.

One day a very strange thing happened. The same breezes that, in the past, had made them dance began to push and pull at their stems, almost as if they were angry. This caused some of the leaves to be torn from their branches and swept up in the wind, tossed about and dropped softly to the ground. All the leaves became frightened.

"What's happening?" they asked each other in whispers.

"It's what happens in Fall," Daniel told them. "It's the time for leaves to change their home. Some people call it to die."

"Will we all die?" Freddie asked.

"Yes," Daniel answered. "Everything dies. No matter how big or small, how weak or strong. We first do our job. We experience the sun and the moon, the wind and the rain. We learn to dance and to laugh. Then we die."

"I won't die!" said Freddie with determination. "Will you, Daniel?"

"When is that?" asked Freddie.

"No one knows for sure," Daniel responded.

Freddie noticed that the other leaves continued to fall. He thought, "It must be their time." He saw that some of the leaves lashed back at the wind before they fell, others simply let go and dropped quietly. Soon the tree was almost bare.

"I'm afraid to die," Freddie told Daniel. "I don't know what's down there."

"We all fear what we don't know, Freddie. It's natural," Daniel reassured him. "Yet, you were not afraid when Summer became Fall. They were natural changes. Why should you be afraid of the season of death?"

"Does the tree die, too?" Freddie asked.

"Someday. But there is something stronger than the tree. It is Life. That lasts forever and we are all a part of Life."

"Where will we go when we die?"

"No one knows for sure. That's the great mystery!"

"Will we return in the Spring?"

"Then what has been the reason for all of this?" Freddie continued to question. "Why were we here at all if we only have to fall and die?"

"That afternoon, in the golden light of dusk, Daniel let go. He fell effortlessly. He seemed to smile peacefully as he fell. "Goodbye for now, Freddie," he said.

Then, Freddie was all alone, the only leaf on his branch. The first snow fell the following morning. It was soft, white, and gentle; but it was bitter cold. There was hardly any sun that day, and the day was very short. Freddie found himself losing his color, becoming brittle. It was constantly cold and the snow weighed heavily upon him.

At dawn the wind came that took Freddie from his branch. It didn't hurt at all. He felt himself float quietly, gently and softly downward. As he fell, he saw the whole tree for the first time. How strong and firm it was! He was sure that it would live for a long time and he knew that he had been part of its life and made him proud.

Freddie landed on a clump of snow. It somehow felt soft and even warm. In this new position he was more comfortable than he had ever been. He closed his eyes and fell asleep. He did not know that Spring would follow Winter and that the snow would melt into water. He did not know that what appeared to be his useless dried self would join with the water and serve to make the tree stronger. Most of all, he did not know that there, asleep in the tree and the ground, were already plans for new leaves in the Spring.
Posted by La Petanque Mariniere at 6:48 PM No comments:

There will be a memorial mass in honor of

The 2:00pm Memorial Mass for Tino at St. Vincent's Church in Petaluma will be followed by a celebration of his life at Jacuzzi Winery on Highway 121 south of Sonoma.
Posted by La Petanque Mariniere at 5:35 PM No comments:

those who leave us either be it expected or not, leave us with a great feeling of loss and loneliness. it is known, as soon as we are able to comprehend life and death, that we are only here for what seems to be a very short time and that it is usually never revealed to us beforehand how we are going to make our exit. it can almost be said with certainty that the departed would want us to be happy and to continue with our lives as we know we should, yet the deep hole caused by the lack of their presence remains....
even though our friends and loved ones leave this earth in a bodily form, they are actually quite never dead. much like keeping a candle burning, they never really die as long as we keep the light of their memories alive. it is only when we forget, that one could say that they truly die.
Posted by La Petanque Mariniere at 8:59 AM No comments: