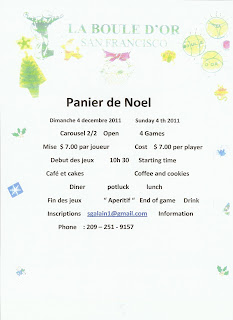 Posted by La Petanque Mariniere at 11:56 AM No comments:

(published, November 10th)
This Saturday and Sunday, downtown Fernandina Beach will look and sound like any typical town on the French Mediterranean. More than 260 competitors (in teams of two) will be playing p/tanque (pronounced pay-tonk), the French cousin of horseshoes and "bocce," the Italian bowling game. Teams are coming from 23 states, Canada and Europe to compete in the 2011 Pétanque America Open, a unique international pétanque tournament held for the third year in a row on Amelia Island.
For the rest of the article, click here.
Posted by La Petanque Mariniere at 1:51 AM No comments:

The 21-acre park has been closed since fall 2010, county officials said, to repair and replace water supply pipelines.

Aside from the park's petanque court and baseball diamond, all park facilities will be open and ready for use, including the seven picnic areas, play structure, horseshoe pits, and volleyball and tennis courts.

After the ribbon-cutting, park group Friends of Flood Park will host family-friendly activities until 3 p.m., including live music, face painting and a scavenger hunt highlighting the park's history and flora and fauna.

Officials said the annual cost to operate the park is about $374,201 and in the face of funding shortages the county is working to keep the park reopened into the next year. Park officials are working with the Board of Supervisors and looking into moving park operations over to the city of Menlo Park.

The park is located at 215 Bay Road in Menlo Park.
Posted by La Petanque Mariniere at 1:34 AM No comments:

Posted by La Petanque Mariniere at 1:30 AM No comments: 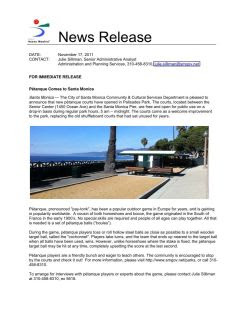 Posted by La Petanque Mariniere at 1:19 AM No comments:

Posted by La Petanque Mariniere at 1:07 AM No comments:

Click on image for more information
Posted by La Petanque Mariniere at 9:18 AM No comments:

Petanque - The Greatest Game You Never Heard Of. 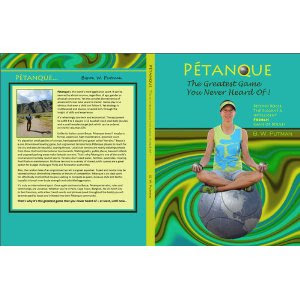 Here is a great book, just published, about pétanque. Actually the first english language book to be written about the sport.

Pétanque is the world's most egalitarian sport. It can be savored by almost anyone, regardless of age, gender or physical constraints. Yet the complex biomechanics of advanced throws take years to master. Game play is so obvious that even a child can follow it. Yet strategy is multilayered and elusive, revealed only through the insight of skills and experience.

It's refreshingly low-tech and economical. The equipment to outfit 4 to 6 players is 12 baseball-sized steel balls (boules) and a small wooden target jack which can be ordered on-line for less than $75.

Also, the random bias of an ungroomed terrain is a great equalizer. Expert and novice may be teamed without diminishing intensity or the joy of competition. Pétanque is an ideal sport for athletically mismatched couples seeking to compete as peers, because style and tactics (usually) triumph over brute strength and unbridled aggression.

It's truly an international sport. Once again contrary to Bocce, Pétanque terrains, rules and terminology are universal. Whether you're in Paris, Cape Town, Bangkok, Ho Chi Minh City or San Francisco, with a few French words and phrases (used throughout the book) you will be embraced by locals and initiated into their Pétanque community.

That's why it's the greatest game that you never heard of - at least, until now...

I love sports. From my early days as an iron pounding gym-rat I branched into technique orientated activities which demand precise bio-mechanics to ensure efficiency, effectiveness and to minimize repetitive motion injury: the astoundingly complex motion of a tennis serve, rolling a fully loaded 19-ft. long sea kayak in 3-ft. swells, the excruciatingly painful, yet artful hand and foot jams of a crack climber and yes, the beautiful flowing whip-like motion of Petanque's au fer shooting all require substantial time commitment and precise instruction to master and unerringly replicate.

That's why I was astounded to discover that a comprehensive Pétanque book had never been written in English or translated from the French. To compound the problem few U.S. Pétanque clubs offer formal or periodic throwing techniques and strategy classes, let alone a structured introduction to rules and etiquette which should be a prerequisite for every novice. This was either a huge oversight or a bizarre conspiracy to keep Pétanque information from the great unwashed masses of America. That's when the impulse to write the book first struck. Like a boxer slipping a punch, I pushed that impulse aside assuming that I simply didn't understand or appreciate the informal resources provided by fellow club members.

So I started playing at the esteemed Portland Pétanque Club and inquired about classes, hiring a coach and written training materials and was openly ridiculed by the regulars. Several months later it came as no surprise when I finally surrendered to the impulse and committed to writing this book that I was immediately shunned; none of the players that I spoke with had any interest in the project. I appealed to the president of the FPUSA (the American Pétanque Association) who is also a member of the Portland Pétanque Club to scour the U.S. membership for interested players - and as the saying goes, "the silence spoke volumes" or in contemporary terms, my emails went unanswered. Flat eyes and apathy greeted me each time I visited another west coast club to perform interviews and attempt to recruit collaborators.

The most disturbing aspects of American Pétanque that I discovered are its elitist and sexist attitudes which are rationalized as historical French cultural prerogatives. In opposition to formal mission statements many America Pétanque clubs are closed communities, accessible by invitation only. Most egregiously this applies to single women. Membership statistics are grossly inflated, in reality fewer than 1-in-5 regular U.S. Pétanque players are women. (I define "regular" as playing at least twice a month.) The Portland Pétanque Club illustrates the most abysmal example. Although they have 100 members, only one woman threw regularly during the entire summer of 2011; during that same period my Pig Iron Pétanque start-up group, which is only five miles from the Portland Pétanque Club, effortlessly recruited nine regular women players within the first six weeks of our inception. To hijack the famous Field of Dreams quote, "Build it and "they" will come, but only if "they" are invited, sincerely welcomed, respected and supported with periodic throwing and strategy training sessions."

The book started to take shape after a fall trip to Belgium and France which provided great exposure to both recreational and high-level play, and interviews with players who love the game and have no reservations about sharing their knowledge. What ultimately made the project so fulfilling and successful was the interaction of the members of my two start-up Pétanque groups. Together we drilled into Pétanque's essence and derived the critical techniques, strategies and etiquette that make it such an incredible sport and threw out all of the ridiculous misogynistic nonsense. The cynic may characterize this approach as "the blind leading the blind". My response is "res ipsa loquitur" (sorry, the benefits of a classics education) - the book "speaks for itself."

I would have greatly welcomed and appreciated support from the rank-and-file players and the American Pétanque Association, but that would have produced a much different book; a book that towed the line and supported the status quo - and I couldn't live with that. Consequently, it's been a bittersweet journey. But I speak for the entire membership of La Boule du Bono and Pig Iron Pétanque when I say that we are proud to help usher in a new inclusive, community-based era of "Pétanque American-Style". We hope that you come to love the game as much as we do.

The book is available at Pétanque America