Please refer to some of the most recent posts, as some have been updated, either with new information, entry forms or cancellations due to forecasted inclement weather. Speaking of weather, several new and important cities, to where players might be inclined to travel, have been added to the weather list.
Also, if you have never been to Bryant Park in New York City, National Public Radio did a nice interview of the local boulistes who frequent the park. Matthew Broderick, as well, recorded a wonderful podcast of pétanque in the park. If you close your eyes, it is easy to feel as though you were there.
Posted by La Petanque Mariniere at 4:05 PM No comments:

If you plan to play in the nationals coming up in Fresno, the following is information that might help you deciding where to stay.

Stay 1 block from the pistes! 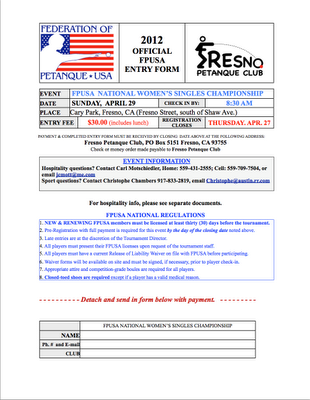 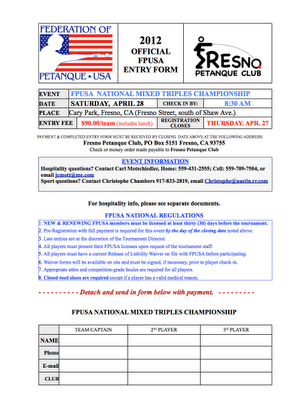 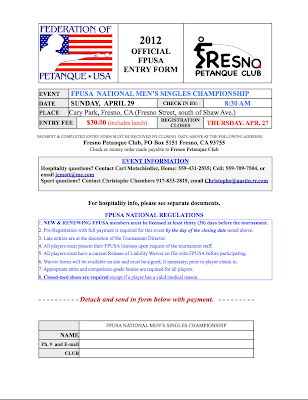 Posted by La Petanque Mariniere at 5:38 PM No comments: 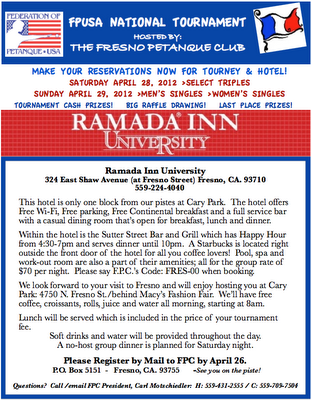 Posted by La Petanque Mariniere at 9:41 AM No comments:

On 15 April 2012, Lamorinda Petanque Club will be hosting the
2012 FPUSA Northwest Regional 65 Over/Under Mixed Doubles Tournament
at 480 St Marys Road in Lafayette.
If you are thinking of participating in this fun new tournament, one player needs to be female and the other male. Also, one player must be over 65 and the other under 65 on the day of the tournament. So, you can have a 70-year-old female and a 15-year old male as a team, for example.

We think that there are enough players of all ages in the area to achieve this 65 over/under mix, so get busy and organize a partner, and come along to this fun new competition.

For those of you who have never been to the Lamorinda Petanque Club, you will find directions and more elsewhere on this blog.

We need to have your entry form and payment by 12 April, so don't delay, act today!!
Posted by La Petanque Mariniere at 5:57 PM No comments:

On April 1, 2012, the Heart of Texas Petanque Club will host its annual Open Doubles Tournament at the Mueller-Browning Hangar in Austin, Texas. The Browning Hangar, built during the Second World War when there was a shortage of steel, is a historically unique structure remaining from Austin’s Robert Mueller Municipal Airport. The renovated aircraft hangar of glued laminated wooden arches has a clear span of approximately 130 feet, rising to a height of 37 feet which accommodates 15 petanque courts inside and another 8 courts outside with a playing surface of decomposed red granite.
Sign up while team openings are available and come to experience the thrill of playing in one of the world’s truly awesome venue as a boulodrome.. Teams will be coming as far as France, Morocco, Greece, Colombia, as well as national teams from TX, FL,CA,LA,Mi etc...
It is open and free for the general public to watch the games. We have food vendors on site.
PASS IT TO YOUR FRIENDS AND FAMILY. TO SIGN UP EMAIL ME BACK OR CALL 512 468 0957
THANK YOU.
--
A + LOVE Arsene
Arsene Dupen
Heart of Texas Pétanque Club
Posted by La Petanque Mariniere at 5:51 PM 1 comment: