Pre-registration is required for this event.

Club Name and Winning Team will be engraved on Tournament Trophy

3 Qualification Games in doublettes – with random paring of members of the same club.

Within each club, players will be ranked according to number of wins and number of points.

Clubs will then be given a ranking by adding the number of wins and number of points of their 8 best ranked players.

The clubs ranking 1 & 2 will play a Final Championship round by opposing their 3 best ranking players in a – 15 point final round.

In the event of:

* Two clubs ranking equal for second place, the club having the larger number of players enrolled in the tournament wins second place and plays in the finals.

* Two players of a given club who rank equal for third place, the tournament director will choose randomly between these two players by a coin toss.

LPM Members,
Join us in helping Marin take back the trophy!
Sign up soon to make sure you can get a spot in the tournament!
Posted by La Petanque Mariniere at 9:55 PM No comments: 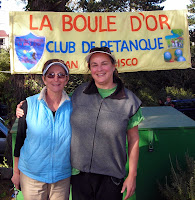 It was a beautiful day in Golden Gate Park as a small but enthusiastic group gathered to compete in this years FPUSA NW Regional Doubles competition. I had the pleasure of playing with my sister, Donna Klaiber, a member of Club Francais de Sacramento. We were the first to arrive - after Joss and John Krauer who, of course, were already busy setting up for the day. As players arrived and coffee and cake were consumed, the team numbers were pulled and the tournament soon began.

With ten teams playing three qualifying games before lunch, Donna and I were happy to get 12, 11 & 9 points, against the fine players that we were paired against. As the day progressed, the wind picked up a bit, but the sun held and soon lunch was over and the afternoon games began. I was busy trying to win - so I can't give you any specific game details - but I can give the final results.
Second Place Consolante: Jacques Avedissian and Richard Prydz
(they took off before our camera came out)
First Place Consolante:
Joss Krauer and Jean-Claude Bunnand 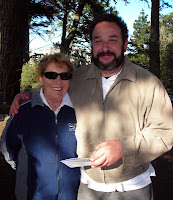 In the Concours:
Third Place: Alain Gusella and Yvette Ghione
(Alain accepting for the team) 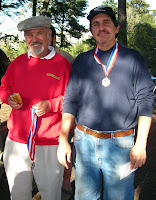 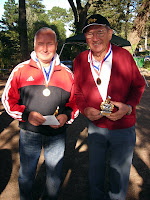 To John, Joss and the members of La Boule d'Or,
many thanks for a great day!
Christine Cragg
Posted by La Petanque Mariniere at 6:47 PM No comments: