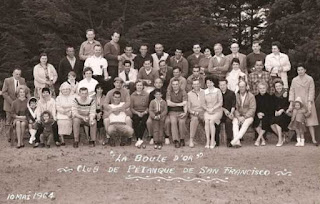 In 1959, a group of French expatriates founded La Boule D’Or Pétanque Club in San Francisco’s Golden Gate Park. It is the nation’s second oldest pétanque club and has flourished for the better part of fifty-six years. Now, after so many of the original members are gone or aging, La Boule D’Or needs help if it will survive.
There are a few individuals trying their hardest to keep the club together yet with a shrinking membership and low attendance at the courts, it is indeed difficult.
For those of you who live in San Francisco and enjoy pétanque and the its’ camaraderie, please help La Boule D’Or survive by taking an interest in the club. For those of you who belong to other clubs in the Bay Area, please try to support them by attending their events. Wherever you live or play, tell your friends about the game! Invite them along! Show them how to play! Be pro-active in preserving pétanque in San Francisco! This will be the only way we can keep such a great pétanque venue from disappearing.
The next Boule D’or event, “Les Paniers de Noël, will take place, weather permitting, at the courts in Golden Gate Park on December 6th. ** Sign up before 10:30 ** Games begin at 11 AM
Carrousel Doubles / 4 games ** $8.00 to play in the tournament.
Golden Gate Park / 36th & Fulton ** Info: Alain 209-251-9157
Bring your own lunch and join us for a day of petanque in Golden Gate Park. 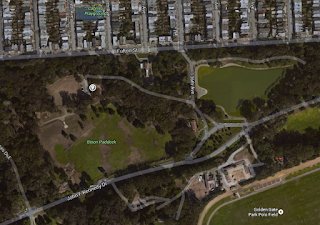 Posted by La Petanque Mariniere at 9:45 PM No comments: 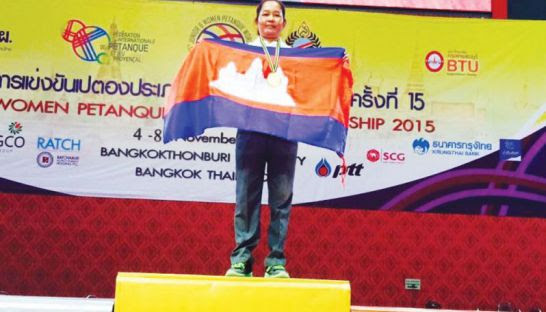 Ke Leng poses on the podium with her gold and the Cambodian flag at the 2015 Women’s Petanque World Championships. Photo supplied

Chhorn Norn
Ke Leng, the heroine of Cambodian petanque, scooped a gold medal at the 2015 Women’s Petanque World Championships in Bangkok at the weekend.
Ke Leng, coming off the back of a gold medal at the previous world championship, quickly qualified for the quarter finals with a six point victory.
She faced Canada’s Maryse Bergeron in the last eight of a competition that is in its 15th year and features over 100 entrants, winning 41-21, before progressing to an easy win over Audrey Bandiera of France, the birthplace of petanque, with a score of 28 to Bandiera’s 9.
Ke Leng faced strong rival Mouna Beji of Tunisia in the final, which she won 33-24, securing her gold medal and her defence of the world championship in the process.
Ke Leng celebrated her second win at the world championships by waving the Cambodian flag.
Ke Leng also competed in the team event, alongside her countrywomen Um Chanthrea, Uk Sreymom and Un Sreiya, but with less success.
While the team topped the group stages, they lost in the quarter-final to defending world champions Thailand.
Alongside her gold medal, Leng can expect a 120 million riel ($30,000) award from the government.
The celebrations which greeted Ke and the rest of Cambodia’s medal-winners at Phnom Penh airport were somewhat subdued, with only representatives from the National Olympic Committee, the Ministry of Education, Youth and Sport, and the Cambodian Boules and Petanque Federation there to welcome her.
However, NOCC General Secretary Vath Chamroeun told the Post before he departed to welcome Ke Leng at the airport that “by winning a gold medal . . . Ke Leng brings a great honour to our country,” and that her win “also salvages our country’s image after we failed to win any gold medals at the SEA Games in Singapore.’’
He also added that: “According to Prime Minister Hun Sen’s recommendations, we will organise an official reception party event for her in the coming days.”
Posted by La Petanque Mariniere at 8:25 PM No comments:

Bring your own lunch and join us for a day of petanque in Golden Gate Park. 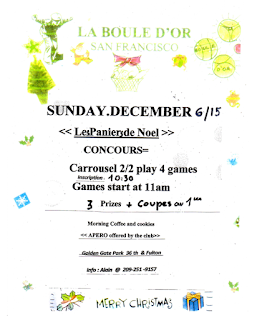 Posted by La Petanque Mariniere at 10:15 AM No comments: