Posted by La Petanque Mariniere at 1:54 PM No comments:

Valley of the Moon Pétanque Club -Ides of March

The Ides of March event has been cancelled due to forecasted inclement weather. For further information the VOMPC hotline is (707) 343-9465 or website www.vompc.org.
Posted by La Petanque Mariniere at 11:04 PM No comments:

The California Commemorative Cup took place at LPM's Pierre Joske courts in San Rafael, last Sunday the 11th, and from all appearances, despite the threat of rain, was a resounding success.
Twenty teams from clubs as far away as Mendocino and Lafayette, not to mention Sonoma, Petaluma and of course our own, battled for the honor of having their names engraved on the cup.
In the end, LPM's Claudie Chourré and Lamorinda's Etienne Rijkheer triumphed over the field to win the honors. Their struggle was great, given that the competition was fierce, yet their perserverance and spot-on performances enabled several unexpected upsets.
LPM would like to congratulate, not only the winners, however all of the contestants who participated in making the competition exciting and the day enjoyable.
Dan Feaster of the Redwood Empire Boules Club took some fantastic images of the days events and can be viewed by clicking on slideshow.
Posted by La Petanque Mariniere at 12:16 PM No comments: 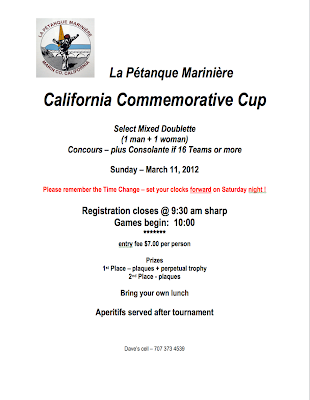 Posted by La Petanque Mariniere at 12:00 AM No comments:

EVENT CANCELLED DUE TO INCLEMENT WEATHER
Posted by La Petanque Mariniere at 12:01 AM No comments:

A Note From Nan Walter

Last Sunday Dan and I went to the oldest pétanque club in America La Boule d'Or of Golden Gate Park in San Francisco for a tournament. We played on separate teams. The courts are veneralbe and as Finn can attest, very challenging to play. Dan's team came in third. There was a young French woman, a SF State student from Poitiers, who was doing a documentary film on the tournament there. She selected our team to follow for the day. Some of her footage is available on line. The team is yours truly; pointer; Higgins, tall guy in hat, former owner of Glendeven Inn, Little River, shooter and captain; Steve Jones, chiropractor, Petaluma, middle. We had a wonderful day and were pleased with our results. We were the only team to beat the winners! We also beat the second place team. Of the teams that finished in the money only Dan's third-place team beat us. The way the points are tallied accounts for our not finishing in the money.
The weather was gorgeous and much fun was had by all. Interesting to note, we were the only exclusively Anglophone team in the competition. Dan was the only native English speaker on his team. All the other teams were Francophone. Announcements were made in French and the handbill was in French.
Nan

Posted by La Petanque Mariniere at 12:24 PM No comments: