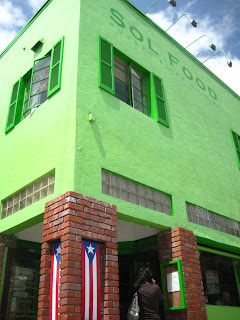 It was a truly wonderful time this past weekend to see all the juniors and women competing to see who will go to the World championships. There were plenty of people from several parts of the country competing and also quite a few players in the separate open tournaments organised on the side.
One of the very high points of the event was Sunday's lunch which was provided by the more than generous folks over at Sol Food in downtown San Rafael. Thanks to the owner Sol Hernandez, the competitors and spectators were treated to a taste of Puerto Rico with pollo al horno (boneless, skinless chicken thighs marinated with oregano and garlic then baked) , rice, black beans, pinto beans, fried plantains and salad.
So, like Bryant Park, San Rafael had it's own co-mingling of cultures on Sunday. The results seemd to speak for themselves and here is hoping that we may see more of it in the future.
Posted by La Petanque Mariniere at 7:36 PM